I'll be honest -- I am a huge roast pork (sio bak) fan. But ordering a plate of sio bak rice from an unfamiliar stall is always a bit of crapshoot, which is why I stick to the same tried and tested stalls that never disappoint. 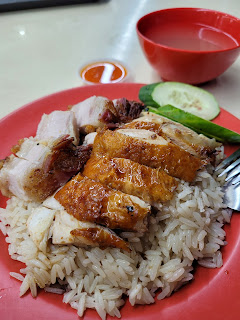 For what could be worse than tough, dry sio bak with that layer of skin that has gone all chewy and rubbery?

Until recently I was not a frequent visitor to Khatib, being a diehard East-sider myself. And I would've never thought that one of the very best sio baks I have tasted was to be found here.

I kid you not, Sheng Hong HK Roasted Delight's sio bak rivals the very best you will find in Hong Kong.

Sio Bak and Chicken Rice - Match Made in Heaven

I like my sio bak served with chicken rice. There's just something about the richness of chicken rice rice, along with the sio bak and chicken that makes for a match made in foodie heaven. Definitely not recommended if you're counting your calories! 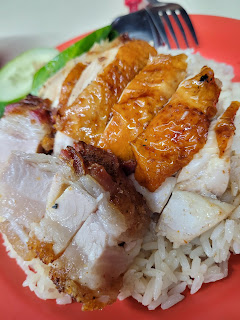 The sio bak here can best be described as buttery with fat that almost melts in your mouth. The crispy skin is unbelievably crunchy, while the meat itself is tender, with a smoky saltiness. Above all, Sheng Hong's sio bak is extremely consistent -- I've never had a serving that was below expectations.

And did I mention they make a mean roast duck, char siew and chicken too?

Who is Mr Yum?